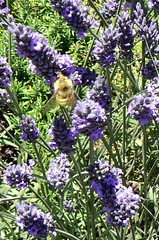 Lavender bee
Originally uploaded by funcrunch.
After our scrumptious breakfast at the B&B we headed to Roche Harbor, where we'd heard there would be lots of wildlife. We must have been in the wrong place, because all we saw were lots of boats (and dragonflies).

So we went to English Camp and did a two-mile hike through the woods. The shade was pleasant as it was so hot out. There was a story regarding America almost going to war with England over the killing of a pig sometime in the 19th century, and separate English and American camps being set up before the San Juan Islands ultimately went to the U.S.

Later we went to a lavender farm where they grew and distilled and sold everything possible made from lavender. The aroma was wonderful, as was the lavender lemonade we drank there and the two kinds of lavender tea we enjoyed back at the B&B.

We attempted three geocaches on the island.

boyziggy had bought a new fancy TomTomGo GPS system that integrates with his Treo and gives you an isometric view of the road and audible turn-by-turn directions. We raced to see who could find the caches first; me with my traditional Garmin Etrex or he with his new toy. I won the first, he won the third. The second cache location was guarded by hoardes of large angry ants so we decided not to pursue it.

We had a good Thai dinner downtown, and ended the evening relaxing and skipping stones at Fourth of July Beach near American Camp. The days are really long here this time of year; sunset isn't until after 9 p.m. Plenty of time to enjoy the beauty of the Pacific Northwest.
Collapse