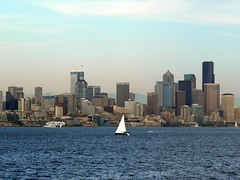 Seattle skyline
Originally uploaded by funcrunch.
Another fabulous vegan breakfast and we bid goodbye to our friendly and funny hosts at the Tower House B&B. We went to see cute alpaca on their farm; they seemed to be as hot as we were and mostly stayed under trees and tents in the shade. We thought that was a good idea, and did the same at a state park, while watching the calm water and kayakers. Then a trip downtown for another bite at that Syrian restaurant (mistakenly called it Greek before) and some shopping at the store for the lavender farm we'd visited previously.

We crowded onto the Victoria Express catamaran for the 4:30 trip to Seattle. I had had enough of sun and photo-taking and attempted to get some sleep. The crew kept making announcements of things to see along the way, and I finally roused to attempt some photos of bald eagles on one island we passed. I still stayed inside until we approached our destination; seeing the Seattle skyline was worth braving the wind for.

boyziggy who will not hesitate to take a cab under most circumstances suggested walking from the boat to our hotel, as it was just over a mile. That mile ended up being grueling in the hot weather, with the last four blocks uphill. Ironically we took a cab soon after to go to a vegetarian restaurant in the International/Chinatown area but walked back and got a nice view of the neat looking public library on the way.

I was last in Seattle nine years ago, on my honeymoon with my ex; we barely made it out of the convention hotel (we were attending Westercon 50). I hope to have a more varied and interesting experience this time around, though we're only here for a couple of days before taking the train to Vancouver. 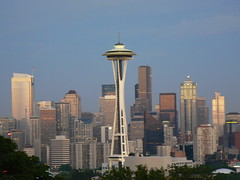 Seattle skyline at dusk
Originally uploaded by funcrunch.
The blistering 95 degree heat limited our desire to do much exploring today. We started with a most excellent continental breakfast at the W hotel, featuring the freshest, sweetest grapefruit I'd ever tasted. Then on to Seattle Center and the Experience Music Project, which I'd been greatly anticipating. The monorail was down for maintenance so we walked, as the heat wasn't too terrible just yet.

There was a bit of confusion over the museum entry (shared with the Science Fiction Museum which we would visit later), but we got our interactive headphone sets and viewed exhibits about the history of the Seattle music scene, Jimi Hendrix, the guitar, and many others. I'm sure my friend Mike at work would love this place. They wouldn't allow any photos unfortunately. The weekend crowd prevented me from trying out most of the interactive exhibits, but they seemed more geared toward non-musicians anyway.

We took a free express bus to the downtown Pike St. Market area for a late lunch at a very tasty African restaurant, then went back to Seattle Center. The IMAX show was sold out so we went to the Science Fiction Museum. I enjoyed seeing books by my favorite authors, Le Guin and Bester, featured, and we enjoyed the displays of original costumes and props from sci-fi movies and television.

The heat by now was acutely painful - the halter top I hoped would help keep me cool was actually making my naked back feel like it was on fire - so we went back to the hotel for a couple of hours. The W is a funky place that seems like it's trying too hard to be hip, with darkened hallways and elevators and an almost disco feel to the lighting. But the amenities do not disappoint.

We had veggie hot dogs at a funky cafe, then picked up our rental car and drove to a good view of the skyline.

boyziggy then went off to play laser tag - I was too tired to join him, especially as we're getting up at the crack of dawn to catch the train to Vancouver tomorrow.
Collapse