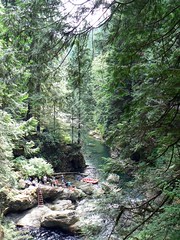 Lynn Canyon Park
Originally uploaded by funcrunch.
Yesterday we had a quite mediocre breakfast at our hotel (Hampton Inn - at least it was included in the cost) and then went to Canada Place. Interesting architecture and nice views of the city from there. We managed to find a bus map and discount ticket booklets and set off to find another restaurant from the Vancouver Vegetarian Guide; it ended up being closed. Normally we might have called, but we don't have Sprint Canadian service and didn't want to pay phone-sex rates (though

boyziggy is using Skype to make calls from our hotel room).

Fortunately we found another veggie place not too far away which ended up having very tasty Indian cuisine and a large selection of vegan desserts. We did a bit of walking and shopping in the area, finding a Good Vibes-like sex store along the way (though I wasn't sure if Ziggy would be welcome at first, even in his skirt, given the spelling of "Womyn" in the name of the shop). Back to the hotel, then another not-so-great meal at a cafe nearby (we're not doing nearly so well with food as I'd hoped, for this part of the trip), and later the Inconvenient Truth movie which I blogged about previously.

Today we walked back to Canada Place and took the SeaBus to North Vancouver. The SeaBus is a model in efficient design, with clearly indicated loading times, separate doors for entry and exit, and a fast, very comfortable ride. Plus, the same ticket we use on the regular buses and the SkyTrain is honored on the SeaBus (though we had to pay an extra buck for crossing into the second "zone").

We lunched at Lonsdale Quay, which has a large selection of international cuisine, similar to the Emeryville Public Market, and also many small shops. Vancouver has a wealth of different ethnicities represented. The Asian population is very large, as in San Francisco, and I often hear many different languages spoken - French, of course, but many more, and not just by tourists. The multiculturalism is something I take for granted back home, and was only notable for its near-complete absence on San Juan Island, where I only saw one other black person during our two days' stay.

Then we took the bus to Lynn Canyon Park, where we had a pleasant and scenic hike through the woods and a walk over the suspension bridge. A film crew was in the park so it was amusing to see their trailers and signposts as we walked through. It was also sobering to see several warnings about the dangers of falling into the water, and memorials to those who had not heeded them.

Later that evening we ventured to the West End, as we'd both wanted to check out the "queer" part of town. Davies Village is the Vancouver equivalent of the Castro I suppose, though the particular bar we went to wasn't obviously gay-oriented. We lucked out that they were doing karaoke that night; a total surprise, since the web site hadn't indicated what kind of music they featured on Tuesdays. I stuck to my safe standards, "Don't Let the Sun Go Down on Me" and "Abacab". This was no Mint Karaoke Lounge; the DJ often took several minutes in between songs locating the right CD, and had to fiddle with the sound equipment several times. But we had a good time, and good drinks, and Ziggy enjoyed watching a particular cute guy with a ponytail and glasses, though personally I thought his singing voice left much to be desired.
Collapse