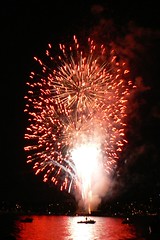 Celebration of Light
Originally uploaded by funcrunch.
We eschewed the crappy hotel breakfast today in favor of a more upscale brunch in the West End. Vegan tempeh hash and pesto tofu scramble; much better than watery OJ and instant oatmeal. As we were close to Stanley Park we headed there and spent several hours walking along the seawall perimeter and through the woods in the interior. The park is quite impressive in size and for the fact that such a gem is walking distance from downtown. Not to mention the many young, fit, scantily clad individuals enjoying the sunny weather at the park's three beaches.

We went back to the hotel to rest for a couple of hours, then back to the beach for a fireworks competition, which

boyziggy had tried to keep a surprise but I accidentally found out about it. The sheer number of people heading to this event was amazing; the main downtown street, Robson, was entirely taken over with pedestrians. We got there two hours early and were lucky to find a grassy spot by the side of the path. The 25 minute display from Italy was spectacular. I managed to get a few decent photos by using the Fireworks scene mode on my camera.

After the show, the thousands of spectators poured out of the park and back onto the streets. It was quite an overwhelming experience, walking at 11 p.m. on a weeknight with so many other people at once. The crowd didn't let up either; we walked for a good two miles back to the hotel and there were still people from the event following, though by then everyone had moved off the street back to the sidewalks. Quite an experience. 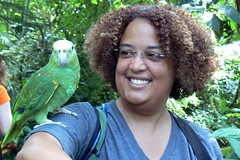 Julie with Casey the African parrot
Originally uploaded by funcrunch.
This morning we checked out of the Hampton Inn and took a cab to South Vancouver to the Manor Guest House B&B.

boyziggy booked us the penthouse suite, which is basically a whole studio apartment, with full kitchen and balcony. We look forward to a tasty vegan breakfast in the morning.

Lots of walking today, much in hot weather through neighborhood streets to Queen Elizabeth Park for our first Canadian geocache. While there we stopped in the Bloedel Conservatory and enjoyed watching the birds. We also admired the lovely landscaping.

Much better luck with food in this part of town; in fact I am painfully full from our delicious Indian meal, followed by tea at a shop that featured hundreds of varieties for sale. Good lunch at a veggie restaurant in a local shopping center as well. Ziggy also picked up some dessert at a Lebanese veggie restaurant on the way home.

I played a bit with the mini-flexi-tripod we bought on this trip to try to get some night shots; mixed results. I really should learn how to use the manual settings on my camera, but for now I'm just using the different scene modes available, including "starry sky" which will hold the shutter open for 15 seconds or more.
Collapse