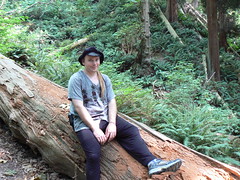 Ziggy on the trail to Wreck Beach
Originally uploaded by funcrunch.
Today was the last full day of our trip. We had planned on going to Wreck Beach, the only clothing-optional beach in Vancouver (that we know of), but the morning was cool and overcast. So we did some shopping in the formerly-hippie Kitsilano area. Besides the banners along the main 4th avenue drag, about the only traces left from the peace-and-love era I saw were the hemp store and the 24-hour veggie restaurant (Naam) we visited later in the day.

Eventually the sun came out, so we headed to the University of British Columbia campus and found one of the trails to Wreck Beach. Many, many, m-a-n-y steps. I had nearly as much trouble going down as coming back up, as the steps were sandy, of uneven height and hard on my knees. But the woodsy surroundings were beautiful. Unfortunately few people were actually nude at the beach today, and we hadn't come prepared with towels or even sunscreen due to the weather. So we found a semi-secluded grassy area to relax in the buff for just a few minutes.

boyziggy is off to play laser tag; I'm peopled-out and sore from the miles of walking over the last couple of days, so I'm lounging at the B&B for the evening. Tomorrow we'll need to head to the airport mid-afternoon so I'm not sure what we'll be doing with our last few hours here. There's so much to do in Vancouver that we could only see a fraction in the week we had here, but now we have a good overview of the city for our next visit.
Collapse