Had a great time with

mikz this evening seeing Shortbus, a wonderfully moving and frankly explicit - very explicit - film about sex and relationships in New York City. Mik and I both knew instantly that we wanted to see it after seeing the trailer before This Film Is Not Yet Rated, another great picture, last month. Short Bus is manna from heaven for bi poly people like ourselves. I may write more about it later, most likely in a friendslocked post.

We had a nice walk and talk afterward and after a snack at Mel's wound up at Powell and Market so late that I wasn't sure the cable cars or the buses I normally would take were still running. So I decided to walk home. As much walking as I've been doing, the Powell Street hill was one that I had never felt confident climbing all the way from Market. Tonight, it seemed... almost effortless. I even increased my stride and picked up the pace at California Street, though still heading uphill. I felt strong, sexy and confident all evening. I laugh at hills.

1a. Don't bring sunscreen.
1b. Sit in direct sunlight for 90 minutes.
2a. Don't bring anything to eat.
2b. Sit directly across from several food booths featuring fattening non-vegan items.
3. Assume there might actually be space to sit within visible and audible range of the stage, without arriving several hours before desired acts.

How to make up for a lousy concert experience:

1a. Wander aimlessly on paths away from concert stage until stumbling upon a man-made lake.
1b. Take lots of photos of birds. :-) 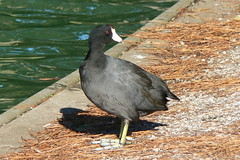 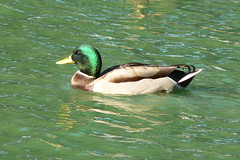