Had a good time tonight with

obadiah perform with his band Eclipse Trip. Saturday was their third performance at the Giorgi Gallery in Berkeley; Ziggy and I had also attended the first one in December. I took a lot of photos at that gig, and a few more tonight which I've added to the set. Their eclectic mix of instruments (sitar, oboe, guitar, bass) and genres (classic rock, Indian classical, jazz, etc.) is definitely worth checking out! 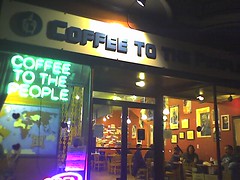 Coffee to the people
Originally uploaded by funcrunch.
I hate shopping for clothes. But I decided it was finally time to do something about my boring wardrobe - to have something nice to wear at my upcoming birthday party, if nothing else. I'd been meaning to check out a couple of stores in the Haight that I had only breezed through several months ago, so

boyziggy and I caught the N-Judah (after a lengthy wait) and made our way to Haight-Ashbury.

We first went to a store that had lots of colorful clothes that I considered Ziggyesque, but he didn't find anything he really wanted. I got a couple of shirts though. Then I visited a slightly more upscale place, and was immediately overwhelmed by all the girly-girl customers and employees. I had a long wait for a dressing room, though the staff was bending over backwards to be helpful, taking my name and asking if I wanted them to hold my clothes for me while I waited. The kind of places I usually shop, I'm lucky if anyone will help even if you ask them directly, so I'm not used to such treatment.

I eventually got a room, right next to a girl who I overheard saying she was shopping for her bat mitzvah, so she must have been twelve. She and her friend constantly chattered, sang some song with slightly dirty lyrics, and giggled. They eventually left, only to be replaced by another girly-girl (though older) couple, constantly remarking "Oh that's really cute. Oh my god, that's so cute. You don't think that's cute? Maybe you shouldn't get it then. But I think it's cute." Etc. Is there some rule I missed that women need to shop in pairs and try on clothes for each other?

Fortunately, I actually liked the majority of the half-dozen outfits I managed to find and try on, and escaped with my sanity intact. We decompressed with yummy Eritrean cuisine at Massawa, followed by an obligatory shopping spree at Amoeba (I had only meant to buy Nellie McKay's new album, but as usual walked out with several other CDs and DVDs, as did Ziggy).

Finally, we enjoyed very tasty vegan apple pie and hot drinks at Coffee to the People. When I asked if I could get hot chocolate with soymilk, the server asked if I wanted vegan whipped cream with that. I can't believe we hadn't found this place sooner. :-)
Collapse