Yesterday I'd planned to shoot photos all day, documentary-style, for 24 Hours of Flickr. But I woke up feeling congested and icky, so didn't shoot as many as I would have liked. Still, I left a half hour early for my voice lesson at Fort Mason to get started. Didn't manage to capture anything particularly exciting; though the summery, fog-free weather did afford a good shot of the Golden Gate Bridge, that subject is so frequent as to be an unlikely candidate for the Flickr book unless it's a spectacular photo (which mine weren't).

On to my lesson. Spent some time catching up with Vicki as she'd had to cancel the previous two weeks. Worked on the U2 song One which I've had trouble getting into; she gave me some good suggestions on the lyrics. Vicki also enlightened me as to the meaning of the song title Sheela Na Gig, which made the lyrics make a lot more sense; too bad that's one of the tunes we're dropping from the set. (Actually neither the drummer nor I like the song anyway, but it was the only one we've picked that's written for a female voice.)

After my lesson I spent an hour taking more photos before heading to band rehearsal, which I think went really well. We'd gotten together the night before at the drummer's house, which helped free us up to start on some new material in class. These included Bohemian Like You by the Dandy Warhols, which is replacing Sheela Na Gig and is way too low for my voice but I was able to take it up an octave (and play some keys to boot); and the Stellastarr song Somewhere Across Forever that I brought in. The latter consists mostly of three or four chords repeated endlessly so it wasn't hard to learn, though the backing vocals are complex; we'll have to work them in later, if at all. I also got a chance to try out Vicki's advice on the lyrics for One, though it still needs a lot more work (on my part).

boyziggy came to meet me at Fort Mason for a picnic as the weather was still so beautiful out. I took more photos, uploading the best when I returned home. Please help me pick one to submit if you haven't already voted!

Today we went to Golden Gate Park as the weather was even more gorgeous and Ziggy wanted to see the "Chomp" exhibit of carnivorous plants at the Conservatory of Flowers. On the way to the MUNI Metro, around 2 p.m. at Taylor and Pine we were stopped by a motorcade escorted by at least 20 police motorcycles before I lost count. Anyone have an idea which dignitary was in town? 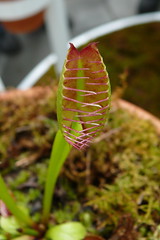 We got off the N Judah at Irving and 7th, and enjoyed our walk through the park, taking more photos of course. The conservatory was very humid, especially the carnivorous exhibit, with mist being sprayed at regular intervals. I only managed one shot of a plant apparently digesting a bug, but it wasn't particularly interesting.

We walked around the park a bit more, then through the Haight, spending way too much money at Amoeba (Genesis CD/DVD box set for me) and stopping at Coffee to the People for a snack. We entertained the idea of walking all the way home, making it as far as the Western Addition and stopping at Herbivore to pick up soy chicken schwarma for dinner, but a bus was just coming at California and Divisadero so we hopped on that. Lovely weekend, never long enough.
Collapse