I've had a couple of pretty horrible days at work already this week, not worth getting into the details (especially in a public post). Fortunately, both were well-mitigated by evening events. Last night I got a most excellent massage from Jesse, a friend of

boyziggy and myself to whom I traded my Treo 600 the other month. The work he did on me was worth giving him Ziggy's Treo 700 too (just kidding, love!). Ziggy also made us a nice dinner (our friend Danielle also came by), including strawberry shortcake and a lemon drop cocktail in a sugared glass, made with rum instead of vodka just for me. I felt relaxed and good enough to sing several of the songs from my workshop (Jesse was familiar with more of the bands than I was, originally), as well as some Elton John tunes which I played on keyboard. I do so love playing and singing Elton John and Billy Joel music. 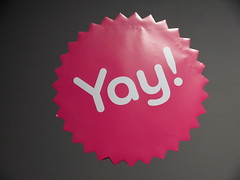 the_ogre to a meetup for Moo, a company that partners with Flickr and other sites to make half-sized photo business cards, among other things. I'd bought a box of 100 (I chose 20 photos, 5 each) awhile back, and still have many left to give out. The meet was very noisy and crowded, though we did stay long enough to get some cake. We were hungry for real food though, so went to a nice Italian restaurant (Umbria) nearby. The very friendly and cute waiter gets huge extra bonus points for running after us when I managed to leave my camera behind. Good thing because the photo I'd asked him to take of me and Aaron came out very well. 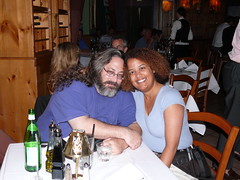 Thanks to those who voted on which photo I should submit to 24 Hours of Flickr. There was no overwhelming favorite, which is no surprise as none of the photos really stood out. One that got a vote was one I hadn't even thought to consider though, as it is a people shot and I generally prefer nature shots. However, I realized the character of the event is such that people shots are perhaps slightly more likely to be included as a slice-of-life theme, and upon looking at it I really do like the colors and shadows in this photo. So here it is, and thanks to my love

boyziggy for coming on a spontaneous picnic on a beautiful Saturday at Fort Mason. 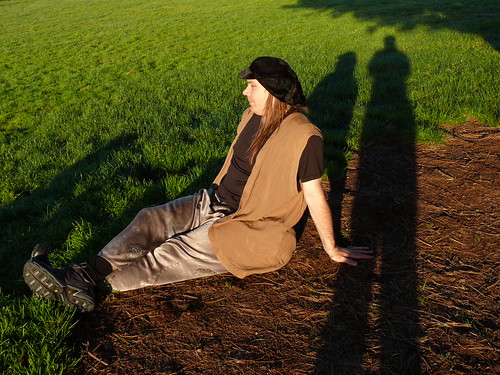