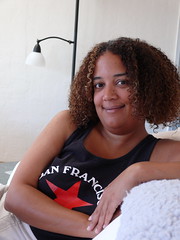 Julie
Originally uploaded by funcrunch
Thanks to my sweetie

gerardp for taking a very nice photo of me.

I had a lovely weekend which I will write more about when I'm not soooo sleepy...

Friday night: Went to Berzerkeley to take photos at another Shim Sham Rebellion concert, this one at Jupiter. I hadn't been to this restaurant/beer garden in many years, since well before I left the East Bay for SF. The place was packed. I had trouble finding a good spot to take photos where people weren't walking in front of me constantly, and even more trouble with the poor lighting. Eventually the lead singer's girlfriend invited me to sit at her table, which at least took care of problem #1, plus I got some very tasty pizza and a drink for my trouble. We got to chatting about photography and video production; she has a much better camera than I do (Canon EOS 20D), but agreed that the lighting was very poor.

I think that if I do end up making photography more than a casual hobby, I will have to bite the bullet and upgrade to a dSLR. I have my eye on the just-released Canon 40D, though many people I know love their Digital Rebels. We shall see. In any case, I stayed up very late, picked about 40 photos out of about 250 and e-mailed a link, but haven't heard back yet so they remain private in my Flickr account for now.

In the meantime, Blue Bear did end up using one of my photos on the cover of their printed catalog - w00t!

Saturday night: Had a lovely date with

the_ogre, which included a light dinner at Nook, a cafe just down the street that

boyziggy and I both enjoy. We also watched Shortbus, which I'd seen with

mikz in the theater when it first came out and more recently on DVD with Ziggy. Still a great film, and I enjoyed the music so much this time around that the next day I bought both the soundtrack and the EP by Jay Brannan, one of the actors who also performs music in the film.

Sunday: Got some housework done and attempted to backup my iTunes and iPhoto libraries. My primary hard disk is backed up daily, but I have been lax at developing a good backup strategy for the data on my two external drives. I managed to fit my iTunes purchased music (and videos) on 4 DVDs, but for iPhoto that many only got me the first six months of this year. Clearly I need a better system. If I knew I were going to buy a new Mac tower soon I'd have four internal drive bays to play with, but I think I will put that purchase off awhile longer, and investigate buying another, larger-capacity external drive for the interim.

Sunday/Monday: Had a wonderful evening with

gerardp, including dinner at my favorite restaurant, Herbivore, and dessert at Maggie Mudd which is in his neighborhood and has delicious non-dairy ice cream. Monday I met his housemate

amelitatwinstar who has three lovely cats, though I only saw two of them during my visit. Then Gerard and I went to lunch at Dolores Park Cafe before heading across the street to see the final local Mime Troupe performance of the season. Ziggy had intended to join us, but got a last minute opera call with extra-overtime pay. Gerard and I enjoyed the show, and, especially, each other's company. I'm sad that the long weekend is over so soon...
Collapse