thomwatson and I were eagerly following the live Macworld coverage of today's Apple event to see what new iPods were in store. We were both very excited over the prospect of a widescreen iPod with WiFi, and were about ready to cede our current 5G models to our respective partners. Then I noticed the catch: while the "iPod Classic" models sported 80 and 160GB capacities, respectively, the "Touch" models were only 8 and 16GB - a tenth of the capacity, with an even higher price. Aaargh!

Even though I realize that using flash memory limits the amount of storage space possible, I really find myself hard-pressed to downgrade from my current 60Gb model just to get the new interface and WiFi capabilities. I use my iPod almost exclusively as a music playing device, not for other applications; I have my Treo for that. While it would be very nice to show off photos and watch videos on the new widescreen, I really don't want to give up the luxury of having my entire music library clipped to my belt at all times, and I just can't do that with 16GB. I wish Apple had just made the Touch model a little thicker and thrown in a real hard disk.

Thom blogged about this also, though I'm not ready to give up on Apple myself; I still plan to buy a new Mac Pro tower sometime in the next six months... Still, I am considerably less than thrilled with today's announcements. And I can't wait to see how the blogosphere responds to the Apple-Starbucks partnership ... 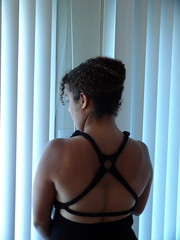 Julie updo
Originally uploaded by funcrunch
I decided to try an updo for my hair in preparation for my upcoming concert. Tonight's Sweeney Todd performance seemed like as good a pretense as any. (Review forthcoming). I'm just amazed that the style held all day long with only three bobby pins and a few pumps of spray.

Oh, and I suppose the dress was pretty nice too, though the front was a bit on the revealing side even for me... ;-)
Collapse