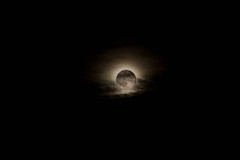 Full moon clouds
Originally uploaded by funcrunch
Today I borrowed a telephoto lens from the office, an 80-200mm f/2.8, and after work headed right back to the roof with a tripod. The moon was just peeking from behind the hills. I was surprised (and annoyed) how fast it rose while I was setting things up. I got some closeups, then realized I couldn't really get any skyline in the shot and phoned

boyziggy to bring up my 17-55mm lens. I switched between them (not fun or recommended on a cold dark roof), bracketing every exposure and quickly changing aperture from 2.8 to 16 with several stops in between, thus ending up with over 260 shots.

Back inside I tried compositing again, this time using Photoshop CS instead of Elements. Even though this version of PS doesn't read my camera's raw files, I realized it doesn't matter because Lightroom exports them as TIFF format before handing off to PS. And with CS rather than Elements, I could use 16 bit color.

I had less trouble compositing this time, but the results were so pixelated I didn't want to upload them. This is the one that I felt OK with - even though the border is somewhat obvious, I see it as more of an artistic statement than a realistic photo. I found a few other closeups that were decent enough as well.

Of course, now I'm jonesing for a telephoto lens of my own, despite the weight and expense...
Collapse