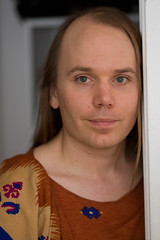 boyziggy! He is 35 today and thus can run for president, and really should because what the country really needs right now is a hot bi poly babe in charge!

Ziggy is in Aspen this week visiting his brother, and while I miss him terribly, he assures me he is getting royal treatment there - five star restaurant, spa massage, skiing, the works. I will still lavish him with affection when he returns, and I encourage the rest of you to do the same. ;-)

My concert photography hobby is still going quite well. Steve Kirk liked my photos of him so much that he featured them on the home page of his new web site. And on his photos page, he put more up from the party I'm about to describe too.

I took more photos last night at Blue Bear's holiday party. It was held at a restaurant that was so dark I was afraid nothing would come out, even with the 85mm 1.8 max aperture lens. Fortunately I had just read a boatload of tips that afternoon in the Flickr concert photography forum. So for some of the shoot I tried using shutter priority, compromising on 1/8 second to minimize motion blur and still have some light in the shot, figuring I could lighten further in post. This worked OK but not great. I also tried spot metering, which didn't work that well but I think I need to learn more about how to use that mode effectively; also, except for a bright stand light on Steve (playing guitar), the performer's faces and bodies were uniformly dark and unlit.

I was forced to switch to the 17-55mm for wider shots which meant only a 2.8 aperture for those; I simply didn't have enough room in the crowd to maneuver far back enough to get more than head-and-shoulders with the 85mm most of the time. I guess I need to prioritize purchasing that 50mm 1.4. (Another $300...)

In any case, it was a wonderful treat to see my three teachers, Vicki Burns (voice), Steve Kirk and Jim Peterson (band workshops) performing together. I also got many compliments from the staff and students there on my photography. Though I'm doing this work mostly for free right now, I'm seriously looking into making a formal sideline business, and will have more thoughts to share about that later...

I had a minor panic when attempting to import the photos, Lightroom hung and then the Finder became unresponsive. Gregor had just worked on my computer the night before, but apparently I'm not out of the woods yet. I phoned and he suggested that my internal boot drive is so full and heavily fragmented that that's what may be causing the mounting problems with my big external drive. I was skeptical as my other two external drives normally mount fine, but tonight I went out and got TechTool Pro and another 750GB external disk. I'm still working on a big video project for

saizai in addition to putting through several gigs of photos a week, and I need to have a working system. I don't have the energy to wipe my internal disk just yet, but now I have the extra space to do so should I need to go that route. Ultimately I want to buy a new Mac Pro anyway (my current G5 is over four years old), but I was hoping to put that off for at least another couple of months.
Collapse