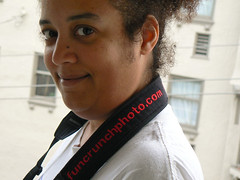 boyziggy got me a most creative and thoughtful birthday gift, which I didn't mention till now because I wanted to get something other than a "coming soon!" message on the web site featured on my new camera strap. The strap was custom-made from a vendor on Etsy after the first place Ziggy sent his design couldn't do the job, so my gift arrived the same day as my new Mac, this past Wednesday.

Unfortunately, so far I've only succeeded in adding a link to my concert photos on SmugMug to my "coming soon" funcrunchphoto.com site, but at least that will give people something to look at while Ziggy and I work on a logo and photo montage. The logo will have similar lettering and coloring to the camera strap, because I like it. As for the montage, I shot off a bunch of e-mails earlier today asking people I've taken good photos of if I can use them on my new site; all those who have responded so far have agreed, which is a good thing.
Collapse