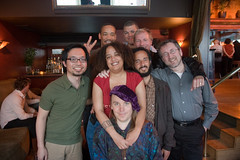 Julie's farewell at Solstice
Originally uploaded by funcrunch
I left my job of seven years and three months today, saying goodbye to UCSF Public Affairs for good. My co-workers had a little party for me in the afternoon, with delicious cake and some of my favorite music, queued up by Mike. Then after work we had drinks at Solstice, which has been the habit for departing co-workers lately. OK, half of the people in this photo don't even work in Public Affairs anymore and a couple never have, but that's kind of fitting given the state of the office right now ;-)

I expected to be more melancholy, and was earlier in the week, but today I was feeling lighthearted and joyful. Hopefully that feeling will continue into my new job at the UCSF Library, which I start Monday. (NO I'm not taking any time off, other than the two days earlier this week for the Blue Bear concert/photo stuff.) Onward and upward...
Collapse