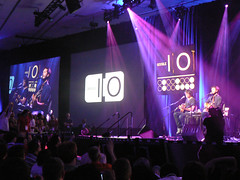 Flight of the Conchords
Originally uploaded by funcrunch
These guys are hilarious and amazing! And I got to see them for free as part of the Google I/O conference I'm attending this week. Go me!

I'll write up more about the conference later. I didn't have my good camera but managed to get some OK shots with my old Panasonic, which I've posted to Flickr. Even though I've been hosting most of my concert shots on my pro site rather than Flickr, tonight's with the point-and-shoot are not of high enough quality to showcase with my other recent work. There were a gazillion people there with SLRs anyway, so I think I'll leave mine home tomorrow as well. I will bring the laptop though; I felt like I was the only person without one...
Collapse