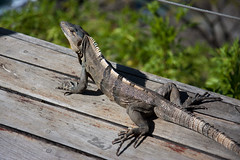 Lizard at Ocotal Beach Resort
Originally uploaded by funcrunch
I've posted some photos from the first couple of days of our trip - more to come.

(These lizard guys are big and just walking around all over the place. Someone who's been here before told me they're called ctenosaurs.)

Sunday morning we got up extra-early as our bus for Santa Rosa National Park was departing at 7 a.m. For breakfast I had plantains and pancakes with syrup, kiwi fruit, plums, and English Breakfast tea. I didn't sleep well, so hoped to doze on the bus. Our group had only eight people so the guide didn't bother to use the microphone during the hour-long trip, so I did drift off a bit during his lecture on the history of Costa Rica. Not that I wasn't interested, I was just really tired.

Upon arrival at the park we stopped along various points on the road and took short hikes while the guide pointed out the local flora and fauna. The guide brought along a scope so that when someone spotted a bird he could let us all take turns viewing it up close. Another person on the trip had a Canon 50D with a 300mm lens and 2x tele-extender, so I had a bit of lens envy; I knew I couldn't get good bird shots with my Sigma 50-150, but that's the longest lens I have currently. I talked with tele-extender guy about photography for awhile; he told me that there's a new-ish 18-200mm that came out with the 50D, which I might check out at some point, though the long end only goes to f/5.6.

Among the animals we saw on this trip were birds, bats, howler monkeys, and various insects. I think I got a couple of decent shots of the monkeys and bats, but I need to process them still. The bats were in the buildings at the end of the trip, and their numbers were impressive. Apparently they are very common here.

I had dressed in a halter top, shorts, and sandals as the tour description led me to believe that clothing would be adequate for this trip, but I soon wished I had worn long pants and hiking shoes. I got a bunch of insect bites (though I don't think they were mosquitoes; they haven't swollen much and don't really itch), and a couple parts of the trail were a bit tricky for me to negotiate. Such as the trail that had been closed off till we arrived, due to a tree falling across it; we scrambled over the roots. Did I mention the winds have been rather fierce here?

On the way back we stopped at "Souvenir World", where I purchased an inexpensive mug, colorful wooden bracelet, and some chocolate-covered guava jelly (vegan, but certainly not lowfat). The mug and bracelet came to about 4900 colones which is about $10 US. We probably won't end up spending all the colones we got as we're putting most of what little stuff we've bought on the Visa. Most places here take US dollars as well. The store also had a couple of goats and some iguanas outside.

boyziggy surfed the web and took a dip in the "Infinity" pool, which has a spectacular view. We attended Dr. McDougall's lecture on soy, which was enlightening even though again I'd heard much of the information before. Basically he argues that traditional soy products such as tofu, soy sauce, soymilk, and edamame are fine in small amounts (though most are high in fat), but isolated soy protein is dangerous and should be avoided, especially in infant formula.

After the lecture, the local painter Carlos Hiller did a painting live to music. Unfortunately I missed most of this as I thought it was starting an hour later. At dinner there were actually more desserts than I could eat. I went back to get my camera and brushed my teeth to make sure I wouldn't stuff myself with yet more desserts when I returned. I took some photos of Carlos and the musicians providing entertainment for the evening, using the 30 1/4 lens that I should have used for the dancers the night before. There was a guide lecture on birds but we decided to skip it. We returned to our room and watched Genesis - When in Rome while I processed photos and Ziggy drifted off to sleep. It was kind of neat watching a UK band sing in Italy on an American channel (A&E) while in Costa Rica. If we had been in San Jose at the time it would have been even more perfect as I saw the same concert in San Jose, California last year.
Collapse