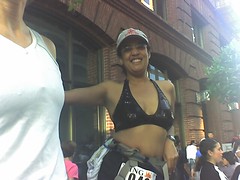 Today, after living in the SF Bay Area for 17 years and San Francisco proper for nearly six, I finally participated in the Bay to Breakers race.

I really surprised myself with how well I did in this race. Granted, 12:35 pace is hardly elite level, but considering how little running I've done in the past month I expected worse, especially with the heat. I truly felt like I could have turned around and run the whole thing again afterward, and in fact walked probably a good 3-4 miles total after the race.

So I've been officially bitten by the running bug again, which will hopefully be a good thing this time around. I even e-mailed the San Francisco Marathon to ask if I could change my 5K registration to a half-marathon registration instead, as I'll have over two months to train for it. It will cost me another $65, but it would be great to run the Golden Gate Bridge. Wish me luck!
Collapse