(Link to photos for the impatient)

On Saturday night I went to The Independent to shoot the Blue Up Ball, featuring The New Up who were having an EP release party. I'd shot them last year at Bottom of the Hill but was looking forward to seeing them again, and shooting my first concert with the new camera.

boyziggy was off work that night so he came along as well.

The opening band was Blue Rabbit, a nifty mix of vocalists and instruments including harp, cello, and violin. The lighting was beautiful, and I took lots of shots. I was very happy with the performance of my 24-70 f/2.8 lens, which enabled me to take more full-stage shots than I normally would (and have them be in focus, anyway). I used my 85 f/1.8 for a number of shots as well, and they turned out very nicely.

The New Up was up next, and festively dressed.

Many more photos followed. ES Pitcher, the lead singer, is not only a strong singer-songwriter, but also gorgeous, energetic, and a joy to shoot.

The last band, Blue Turtle Seduction, sounded fun, but unfortunately Ziggy and I were both tired and had to get up early, so we only stayed for the beginning of the set. I still got a few pix.

I spent many hours this weekend editing the photos. I did the editing mostly in Lightroom, avoiding Photoshop as much as possible as CS3 doesn't support the 5D MkII raw format directly which means I have to convert to DNG as an intermediate step. Plus, at 21 megapixel resolution these files are *huge*. Some of the exported JPEGs (300 dpi) were over 14MB each. I used Jeffrey Friedl's excellent Lightroom plug-in to upload to SmugMug as I went along, which saved time.

Overall I'm very happy with this new camera and lens, and expect to enjoy shooting with it for years to come.

Today the California Supreme Court upheld Prop 8, but allowed existing same-sex marriages to remain valid. Protesters are blocking the streets near San Francisco City Hall as we speak. I am not there now, but will be at 5 p.m. If you can, please join me to fight for marriage equality. We cannot stand for this travesty. 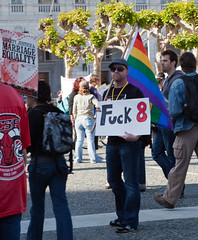