So the other day I finally got around to installing the copy of Windoze 7 Pro I've had on my desk for a couple of months. I wasn't sure if it would work under Parallels 4 on my Mac Pro, but it installed quickly and seamlessly, which was a relief, so it doesn't look like I'll have to upgrade to Parallels 5 immediately. (We'd purchased Parallels 4 a year ago but we couldn't get a working copy of XP to install on it, and I refused to install Vista.)

Anyway, tonight I decided, after some research, to upgrade from Quicken 2002 Deluxe for Mac (which surprisingly still runs mostly fine under OS 10.5) to Quicken 2010 Home and Business for Windoze. I carefully followed Intuit's directions for preparing my Mac export file, but with the large time interval not surprisingly things went a bit kablooie. Dates from year 2001 ended up as 1901, year 2000 dates ended up with today's date, etc. After the fourth import attempt I realized I would have to fix each of my many accounts manually.

So I'm now going down memory lane, which is painful, as I'm reconciling savings accounts from back when I had thousands of dollars to put into savings on a regular basis. Plus notes on transfers of treasury accounts to my ex on the date of our divorce in 2001.

This financial project is going to be a fun few weeks... *sigh* 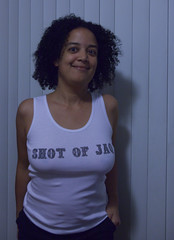 Shot of Jaq
Originally uploaded by funcrunch
Jono Bacon, that witty, talented, and good-looking Brit that I mentioned having tea with, hosted a contest along with his Shot of Jaq co-host Stuart ‘Aq’ Langridge. The first three people to order merch from the new Shot of Jaq Store would win the opportunity to listen in on the recording of a future episode of the podcast.

I was the first to order a shirt, which conveniently arrived the same day I had a hair salon appointment. :-) (Too late to take the photos in daylight, unfortunately, but at least my hair looks good!)
Collapse