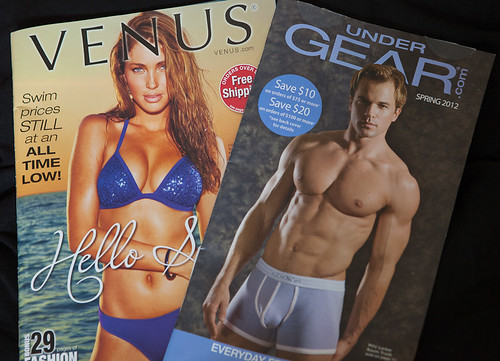 A number of my friends and acquaintances have been commenting on a ritual conducted at PantheaCon, which only "women born women" were permitted to attend. Many attendees, including my friends, were outraged at this exclusion, and held a silent protest. I agree with them, though I'm not a pagan so I can't comment on the religious or magical aspects involved. I wanted instead to share my current thoughts about gender and sex, from the perspective of one cisgendered bisexual woman.

The photo above is of two catalogs that have been sent to our apartment. I've never ordered anything from either of them.

boyziggy ordered something from Undergear online once, hence we got added to their mailing list. We've kept the Undergear catalogs for amusement as they leave little to the imagination, and seem clearly geared to gay/bi men. I was going to throw the Venus catalog out, but I actually like a few of the swimsuits in it.

In any case, these cover photos seem to represent the current American ideal female and male bodies, as unrealistic as they may be. Plenty has already been written about the extremes of starvation and dehydration many models go through to achieve these looks, not to mention liberal use of photo retouching, and breast implants. I'm all for fitness and health, and these particular models may actually be perfectly healthy, but body size is not what this post is about. It's about body parts, and why people seem to care about segregating them so much.

Biologically, what makes a man a man, or a woman a woman? Is it just the presence or absence of a uterus? What about a genetic test for X and Y chromosomes? I encourage everyone who hasn't already to read this long but informative essay about why it isn't so easy to determine sex.

Visually, what makes a man a man, or a woman a woman? Breast size? This varies widely for both women and men. Facial hair? Few women show it, but the dirty secret is that middle age brings noticeable upper-lip hair to many women. How about clothing choices, hair style, makeup, jewelry? These fashions are constantly evolving.

Socially, what makes a man a man, or a woman a woman? Traditional gender roles still exist in this country, but those who deviate significantly from them are more likely to have their sexual orientation questioned (if even that), than their actual sex.

Personally, I have no interest in events or spaces that are segregated by gender or sex, regardless of the criteria used to determine it. I obey rules and norms about using only women's restrooms and not showing my nipples in public not because I agree with these restrictions, but because I'm not willing to draw a lot of attention to myself. I don't choose to befriend or have sex with someone based on what body parts or chromosomes they happen to possess. And I strongly support complete gender and sex neutrality when it comes to marriage, the workforce, and every other aspect of society.

I would love to be able to swap sexes periodically, as in Ursula Le Guin's The Left Hand of Darkness. But that's not going to happen, and as frustrated I get with my female anatomy at times, I have no desire to alter it surgically. I respect those who do wish to change sex, whether through surgery or not, and will call them by whatever pronoun they prefer. I do wish we had a workable gender-free language.

These are just my ramblings; I'm certainly no expert on this subject. Just another collection of cells and thoughts inhabiting the Earth for a few decades.
Collapse