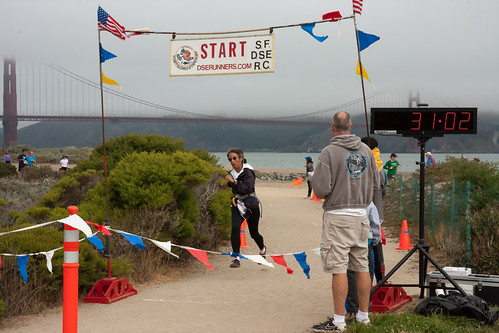 Today I ran the DSE Crissy Field 5K. I hadn't originally planned to enter this race, preferring to concentrate on maintaining a consistent exercise program this summer and not worry about racing until the fall. But this Monday I missed a scheduled workout, due to illness, for the first time in six weeks. I saw an opportunity to make up for it with today's race, and so I did.

Unlike most races, which I've treated as regular runs that just happen to have other people doing them, I decided to give it my all in this race. I have a goal to break 30 minutes in a 5K. Ten minute mile pace isn't even considered running by some people, but for me it feels really fast, and uncomfortable. And to finish a 5K (3.1 miles) in 30 minutes, I have to run faster than ten minutes a mile. The closest I've come is 30:48 in a Lake Merritt Joggers and Striders 5K back in '98, where I improbably came in first in my division. (There were very few runners under 30 years old in that club.)

Despite my improving fitness, I knew breaking 30 minutes in today's race was unlikely. Still, I wanted to give my best shot. I jogged slowly to the start line, about three miles. It was 55 and overcast, so I wore long tights and a windbreaker. The cool weather and flat, dirt-and-asphalt course were favorable for a fast time.

We started just after 9 a.m. I had lined up a little farther ahead in the pack than usual, but still had a bit of a slow start passing other runners. Felt good for the entire first mile, despite running into a bit of a headwind. Passed mile 1 in 10:30, and knew I wasn't going to break 30 today.

Mile 2, still felt OK for most of it. Watched the eventual winners storming back the other direction, along with crazy runners doing the simultaneous six hour race on a one mile loop. Felt the rougher asphalt and cambered road begin to batter my feet through my minimalist shoes. Touched Hopper's Hands at the Fort Point turnaround, then began to feel fatigue from getting less than five hours' sleep. (Fortunately I'd slept extra-long the night before last.) Passed the two mile mark in 20:28, surprising myself; assuming the markers were accurate, I was actually picking up speed.

Mile 3, definitely fatigued. Breathing heavily, heart pounding. Legs felt absolutely fine though. Tried to concentrate on having a longer stride length, and ignoring my lungs and heart begging me to slow down. Thought about those ultrarunner autobiographies I've been reading - Scott Jurek, Marshall Ulrich, Dean Karnazes - and how much pain they've gone through compared to my little effort. I felt overheated, but feared taking off my jacket would slow me down as my Camelbak was fastened tightly around it. I opened all the zippers and took off my hat instead, which helped cool me down a bit.

Resisted looking at my watch again until I hit the mile three marker at 30:10. Didn't break 30, but I was still going for my fastest DSE race time, and that was something!

Finish line in sight, I summoned a last surge and crossed in 31:03, indeed my fastest time for a DSE race.

boyziggy was there at the finish line to take photos, which was wonderfully supportive. Took a bit for me to catch my breath though! 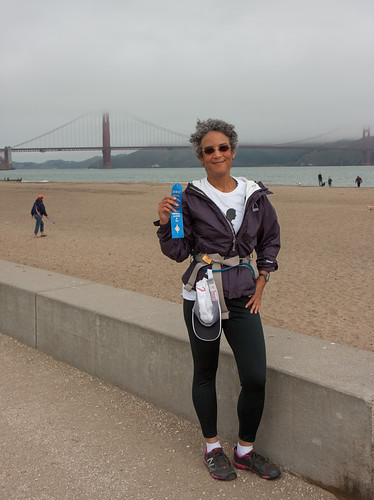 Rewarded myself with a savory vegan crepe at the nearby Fort Mason farmers market. Going to nap soon. My 30 minute goal is within reach!
Collapse