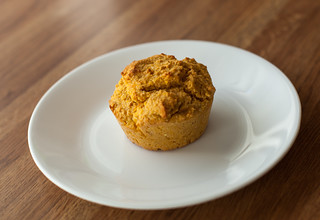 Ah, wheat. Staple food of many civilizations, yet feared and scorned by many dieters, much like potatoes. And just like potatoes, much of the blame lies in the fattening toppings that people put on foods made with wheat flour: Butter, margarine, cream, and oil.

Bread and pasta are indeed more calorie-dense than whole grains like oats and rice, but are still healthy choices when choosing whole-grain versions made without oil and without adding fats. Eating bread and pasta on a near-daily basis didn't hinder me from losing 25 pounds and keeping it off, even during periods of relatively low physical activity.

Of course, some people avoid wheat flour because of gluten intolerance or wheat allergy, not concern about weight gain. Fortunately I don't have a sensitivity to gluten or wheat myself, but I have been bringing more gluten-free food to potlucks lately.

Finding bread that is vegan, whole-wheat, and oil-free can be a challenge. I've yet to find any tortillas, hot dog or hamburger buns that fit all three criteria other than Ezekiel, which is sprouted (and I dislike sprouted breads, unfortunately). Pasta is a bit easier. Trader Joe's sells several kinds of whole wheat pasta consisting of organic durum whole wheat and nothing else. Whole-wheat couscous (another kind of pasta) is also available at some markets.

Here are some ways I like to eat wheat:

I've been eating this as a snack frequently lately; as I work out regularly, I can handle the extra fat from the peanut butter.

Spread the peanut butter on the bread. Top with banana slices. Drizzle with agave and sprinkle with cinnamon.

boyziggy and I have been enjoying for years. We now have a pot that will simultaneously steam the broccoli while cooking the pasta, a real time-saver! When cooking frozen broccoli in the microwave, I pour vegetable broth over it and sprinkle with a bit of garlic powder for more flavor.

Cook the pasta, add the broccoli (as much as you like) and toss well. Sprinkle with nutritional yeast to taste.
Collapse