I've spent several hours shopping for clothes this week. This is not one of my favorite activities; in fact, I avoid it as much as possible. But I'm freezing and hardly any of my current clothes fit anymore, so it was necessary.

I prefer lower-end stores not just because the clothes are cheaper, but because I hate being bothered by salespeople while I'm shopping, and I couldn't care less about designer labels. So I started at H&M since I got a coupon in the mail (20% off one item) for that store from Discover Card, and I'd found some OK tops there before. This time, however, the music was virtually intolerable, with both that and the clothing on the ground floor clearly geared toward people 10-25 years younger than myself. I went upstairs to the "ladies" section, which was only marginally better.

I gave up on finding any sweaters I liked that weren't huge, despite my need for warm clothes, and stuck to base layers. I found some tank tops in XS size that fit snugly (and will be good for yoga as well), but almost everything else I looked at in that "size" was too large. I did get a couple of viscose shirts that feel nice against my skin, but they're quite thin, and you tell me if this looks "extra-small": 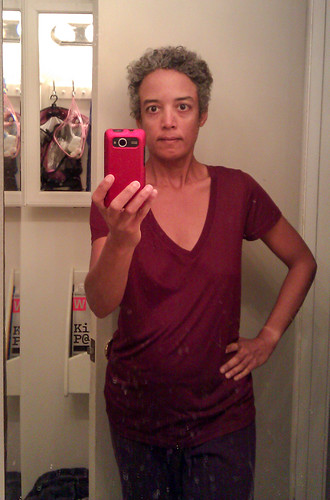 (Apologies for the dirty bathroom mirror.)

I also got a cheap pair of shoes, which H&M refused to let me use my coupon on as they were already discounted, so I saved a whopping two bucks on one of the shirts. And after walking several city blocks in the shoes, I'm once again reminded that no matter how wide the platform is, I will never be comfortable wearing heels.

Next, I went to Macy's. I normally only go there when I have a gift card, but I needed nicer clothes than I could get at a cheap store, and I've acquired a nice suit and some good-quality jeans there previously (neither of which fits anymore). Here, I was quickly overwhelmed, between the Christmas music and decorations (ick), designer clothes (double ick), and bewildering array of choices in the jeans section, most of which seemed to be low-rise (additional ick) or boot-cut (N/A for my footwear). I left empty-handed and discouraged.

Online was next, trying Zappos since they have a really good web interface, next-day shipping, and free returns, and I got a good pair of running shoes there once (at least those still fit!). After much effort, I settled on three sweaters, all size "S" (smallest they offered for these), that were on sale. When they arrived, two of them were much thinner than I expected, but fit OK, though they're not particularly flattering. The other, dressier one was OK, though

boyziggy said it made me look even skinnier. I think I'm going to avoid shopping for clothes online in the future (other than running shoes, where I usually get the exact same model and size I've worn previously.)

Finally, today I went to Target, where I'd been planning (but putting off) an extended clothes shopping trip ever since the new one opened at the Metreon. When I lived with my ex in El Cerrito, we were a block away from a Target, and I shopped there all the time. This time, I took quite awhile trying on all the "XS" clothes that were in colors and styles I liked, which was not a large selection. Half of them, including the really warm sweaters, were still too big. But I did manage to get a couple of thinner sweaters, along with several very inexpensive long-sleeved T-shirts and tank tops.

I am still resisting the idea that I am so skinny that many "XS" clothes in these kinds of stores are now too big for me, and wondering where women who are slimmer (but not necessarily shorter) than I am shop for their clothes. I ran into a fellow Free Farm volunteer at Target who is small and slim, and she said she usually shops at Out of the Closet. I definitely support thrift stores (and recently donated a huge amount of clothing to them), but shopping there is even more of a crapshoot than taking my chances and H&M and Target.

Right now the idea of shaving my head, donning a robe and joining a Buddhist monastery is an appealing idea... either that or a nudist colony, somewhere warmer than here...
Collapse