Today at the farm I got to plant strawberries around the perimeter of that Hügelkultur bed I helped with last Wednesday. Strawberries are one of my favorite fruits (surpassed only by peaches), so I'm excited to monitor the progress of these plants, and look forward to enjoying the first ripe berries from the harvest in a few months.

By lunchtime it was warm enough to strip down to a tank top. The warmth of the sun felt incredible on my bare skin. I've missed it for so long.

Being at the farm gives me such a good feeling, especially sharing the vegan lunch with the other volunteers. In the six months I've volunteered there, I've yet to meet anyone I disliked. Can't say that about anywhere else I've worked (including my other volunteer positions). It's a very special, unique place.

It's not all unicorns and rainbows though. One day a few months back I was working in the greenhouse, bathing trays of plants in fertilizer. While letting each tray soak for a minute or two, a snail caught my eye. I love snails. I've always thought they were really cute. 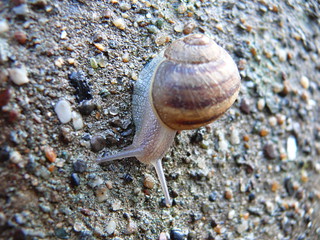 I watched him for awhile, then pointed him out to another volunteer. The volunteer thanked me, grabbed the snail, took it out and stepped on it. I nearly had a heart attack. But I learned my lesson that day: Snails eat the plants, they are pests, they are competing with us for the food. They need to be removed or killed.

I still felt bad about this though, and wondered aloud what could be done to save or relocate them. The man in charge of our greenhouse said that if we knew someone who had chickens, we could put them in buckets and the chickens would be very excited to eat them. (It amuses me how many people think chickens are vegetarians, perhaps influenced by commercials by poultry producers promising chickens fed only with healthy corn. Chickens are birds. Left to their own devices, they scratch in the dirt for bugs.)

Another volunteer said that we could throw them in the outgoing compost bin and let Sunset Scavenger deal with them. So that's what I decided to do from then on.

So today while helping remove a row cover, I found several snails and put them aside for a moment. After helping fold up the long cover I collected the five creatures in my hands. They soon came out of their shells and crawled all over my hands and each other, craning their eye-stalks. I watched for several minutes, transfixed. The sensation of the largest snail crawling up my finger was pleasant, like a gentle massage. I showed a couple of other people; they didn't seem particularly interested. (One suggested getting some Boric acid.)

Eventually I dropped the lot gently into the compost bin. No use being overly sentimental. After all, it's silly to value one animal's life over another based on looks or amusement value alone. I'd kill a housefly and many other insects without hesitation. I don't pretend that my fascination with snails has any moral or rational basis to it.