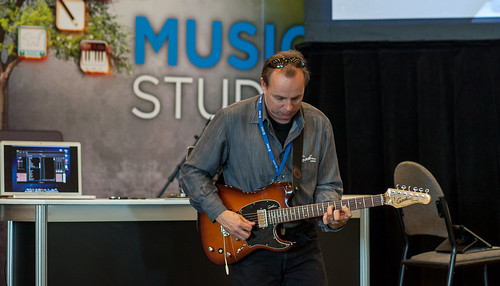 On Thursday I went to Macworld Expo, which I've been attending nearly every year for over fifteen years now. For possibly the first time, I really felt ambivalent about going. The expo has little appeal to me anymore as I no longer have much spare cash for tech toys, and the event has become increasingly focused on iOS, which I've been avoiding in favor of Android (though I still use Mac OS X on the desktop). Apple itself pulled out years ago, so no more exciting product launches or keynote sessions with "Just one more thing" to look forward to. And I won't pay for a higher access pass to go to the workshops and more in-depth tech talks, which now include subjects like "IPhoneography" (*cringe*).

I have, however, enjoyed several good musical performances at the expo over the years, including Zoë Keating and Jonathan Mann in 2011 and Sal Soghoian and Berklee College of Music in 2012. So I figured I'd walk through the expo and then stop by the music stage to see what was up. Unfortunately as of the morning of the first day, the schedule for the music stage was still not posted on the web site.

I arrived mid-afternoon on Thursday, just missing Berklee on the music stage. I wandered through the expo hall, which had lots of empty space this year. I remember when the expo completely filled Moscone North and South halls; now, it barely fills Moscone West. I was instantly bored, cheered only by free samples of Daiya nondairy cheeses being handed out near the entrance. (I don't normally eat this stuff, but it was free and I was hungry.)

I went back up to the music stage and witnessed what might have been the single most boring presentation on a potentially interesting subject I've ever seen at the expo. The product was a wireless guitar controller and software that could turn your electric guitar into a MIDI instrument. The presenter they got for the demo sounded like Ben Stein, except without the wit. The slides were mostly plain text. Eventually they showed a few screenshots of the product, and then finally let the guy pictured above play for about five minutes (with the cool Godin MIDI guitar, one of which is also featured in one of my favorite shots from 2012). That was it.

Trying to find something else to entertain me, I wandered over to the nearby Macworld Live stage, where a panel was about to give a talk on "Mac Gaming: What Went Wrong?" (I found the title apt and amusing.) I recognized the photogenic Veronica Belmont from her frequent appearances on the TWiT network. 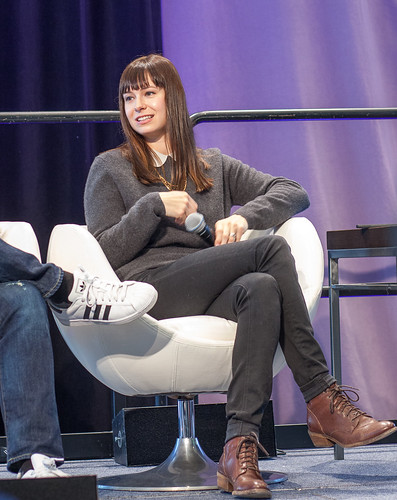 I snapped a few more shots but my heart wasn't really in it, and I realized I'm just not that interested in listening to tech pundits talk anymore. Strange considering that up until maybe a year ago, I avidly watched and listened to many podcasts on the TWiT network. Now I almost never do. Technology just isn't my passion anymore. Maybe it will come back someday...
Collapse