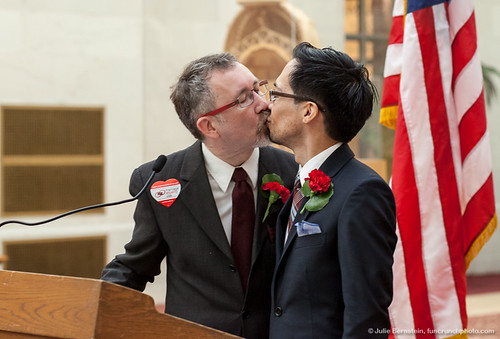 Even though I stopped taking on photography gigs six months ago, I have continued to license photos and do occasional self-directed shoots on subjects of interest or importance to me. One of these subjects is the fight for same-sex marriage equality in California, which I have been documenting for the past three years. So on Thursday I headed to San Francisco City Hall for the annual Valentine's Day rally and sit-in at the clerk's office. My friends

jefftabaco, pictured above, were in attendance, along with many other familiar faces.

I spent a good 14 hours from the time I left for City Hall to the time I finally shut down the computer and went to bed after sorting, keywording, editing, posting, and tagging 85 photos from the over 400 I took at the event. As usual, I put the full gallery on Zenfolio and a smaller selection on Facebook and Flickr, and additionally uploaded a select few to my stock agency's live news feed. I encouraged people on Facebook to tag themselves if I hadn't done so already, so I could get more complete captions for the photos and also add people to my alphabetical list of participants in these events.

The following morning, I noticed a screenshot in a link one of the participants posted to a video about the event. The screenshot looked suspiciously like one of my photos. I clicked through and found that a CBS news affiliate in Fresno had used two of my photos very prominently in their 11 p.m. broadcast story about the event, without any notice to, permission from, or compensation to me. I was livid. I e-mailed the station, copying the news director and business manager and including screenshots from their video (which was not easy as the video shrunk to thumbnail sized whenever it was paused) and a link to the original photos in my gallery.

The news director soon phoned me and was actually very reasonable and apologetic. He explained that someone at the event had sent them the photos and he thought they were "fair use". He also claimed the photos had no watermarks or other identifying information, though they clearly did when I posted them. I explained to him that the sender(s) had no rights to those photos, which were not taken on their behalf; I owned the copyright, and the station's broadcast of them was clearly not fair use. He agreed with me, said he wanted to make it right, and asked what I would charge. When I asked what they normally paid for photos, he said they didn't; people just sent them in. I came up with what I thought was a very fair price (far, far less than they would have been on the hook for had they appropriated Getty's photos; a Getty photographer has also covered many of these events) and he agreed to pay it and asked me to send them an invoice.

Meanwhile, one of the people who sent my photos to the station left me a voicemail saying that she thought that since I posted the photos to Facebook and asked people to tag themselves, they were free to use. I left her a message explaining that that wasn't the way the law worked, that she couldn't just take someone else's photos and send them to someone else to use, and that I was not even notified much less asked permission first. I explained that I'm fine with people on Facebook sharing my photos and using them as their cover or profile photos as long as they credit and link back to me, and I've frequently offered marriage equality organizations the free use of my low-res photos as long as they get my permission first. But a general news agency needs to license photos from me properly, and really should have done their due diligence.

So as if this weren't enough, a friend of the person who sent the photos proceeded to slander me in comments on my Facebook album, accusing me of threatening the station with a lawsuit (I did no such thing), and of trying to profit off of the event. After several back-and-forths where I attempted to educate her about copyright law and basic manners, I removed myself from the discussion.

boyziggy and Ben came to my defense, as did

thomwatson in very eloquent fashion. But I have yet to receive an apology from the slanderer.

To top it off, numerous people from the event have been sharing my photos in their own Facebook albums without crediting me, sometimes with my watermark cropped out. Facebook strips metadata from images, so the watermark or caption is my only hope of establishing my ownership of these photos. But in today's culture, anything put online is apparently up for grabs for people to do what they like with, law and ethics be damned.

This unpleasantness on top of all the other obstacles and rudeness I've faced over my short photography career has seriously made me not want to pick up my camera ever again, no matter how worthwhile the cause. I've said this before and I'll say it again:

It is only by societal convention that we've decided that digital art and music are essentially worthless and can be duplicated by anyone at will with virtually no consequences, whereas stealing a loaf of bread, a physical object, can land you in jail. If I'm going to give away my time and work, I'd much rather the product of that work be food, which is essential to life, rather than digital photos, which are not.

And with that, I think I need to take a break not only from photography, but from social networking as well.
Collapse