I stopped wearing bras for the most part around the time I noticed my 36B bras were getting too loose. I'd always hated wearing bras, and hated shopping for them even more so, and didn't see the point if I was down to an A cup. I don't care about nipple show-through, and I don't (and wouldn't) work in a job that requires modesty in that area, though I (generally) won't wear a semi-transparent shirt in public. I still wore sports bras for running, however.

Today, I did a track workout, and since it was only going to last about 15 minutes* and all my sports bras that actually fit needed washing, I didn't wear one. And I didn't notice any bounce or discomfort whatsoever. A great discovery!

So from now on, I only need to wear a sports bra if it's warm enough outside to run shirtless (which I do as often as possible, to enjoy feeling the sun on my skin and get a natural source of Vitamin D). And I'm really resentful I need to do it even then, as a woman's nipples really should be legally indistinguishable from a man's. The recent ban on nudity in San Francisco technically only applies to genitalia, but I'm not brave enough to test the waters. I'm very happy to be topless or completely nude around other people who are, in hot tubs and such, but I don't want to be the only woman jogging along the Embarcadero or the Marina wearing nothing above the waist.

* Six laps around a 400-meter track, for the Adult Fitness Test. It actually ended up being 1.6 miles as I was in a middle lane, and I confirmed that I can now sustain 9-minute pace for over a mile!

Had some especially good experiences with running this week. 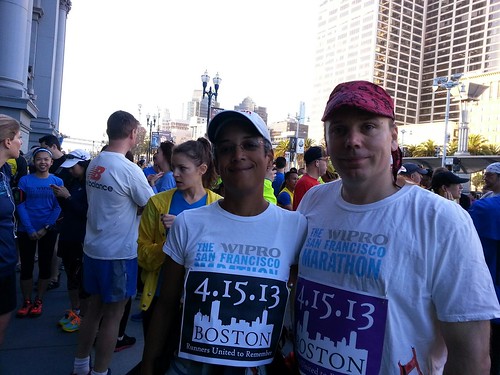 Feeling good about having a fitter, stronger, more flexible body than ever before. So lucky to live in such a beautiful city to run.
Collapse