Summer in San Francisco. This time of year, the fog finally relents and lets the warming rays through. The temperature can soar into the 90s, even the triple digits on occasion. 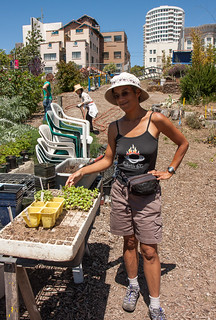 The above photo (by my partner

boyziggy) was taken five months ago, at The Free Farm where I do volunteer work. I happened to be wearing the identical outfit yesterday. In May I had not yet changed my name and was not identifying as gender-neutral, though I was heading in that direction. The differences between the way I looked then and now are very subtle. I ditched my omnipresent fanny pack and stopped shaving my legs and underarms. I got my hair cut shorter, but you can't tell with the hat. That's basically it.

I hate that I now hesitate before putting on an outfit like the above, because I happen to think I look good in it. I was at the peak of marathon training at the time of this photo, and my strong leg muscles are in evidence. Those call out to me much louder than the spaghetti strap tank top which screams "female" to the rest of the world. But that style keeps me cool while allowing more sun on my shoulders, since society has declared that I am not permitted to go in public topless, which I'd strongly prefer.

I don't see breasts in the same way as most of society or most trans* men. They're a secondary sex characteristic which vary in size greatly amongst all sexes. Some cismen with gynecomastia have breasts as large as mine, but you don't usually see them because they often hide them out of embarrassment. In fact, some of the most popular binders are designed for cismen, not transmen. And I recently discovered that men can even lactate under certain conditions, which was the last nail in the coffin for me as far as distinguishing "male" from "female" chests.

Many transmen and some gender-neutral people bind or get top surgery because they look in the mirror and expect to see a flat chest. This is not the case for me. I'm fine with what I currently see in the mirror, but I'd be fine with a flat chest too. If I woke up tomorrow and my breasts were gone I'd celebrate, but only because I could finally go outside topless without harassment, and might have a better chance at reading as something other than female.

But that miraculous nonsurgical transformation isn't going to happen, and I don't think I should subject myself to the risks and expense of an operation if I don't personally have a problem with the body parts in question. And I don't want to subject my chest to the discomfort of binding when I can't even stand wearing bras. It's society that has the problem with (and assumptions based on) my breasts, not me.

What gives me dysphoria are the body parts that aren't publicly visible: my uterus, ovaries, vagina, and vulva. I find it ironic that primary sex characteristics such as these are not what people look for when deciding what gender you are. They look at breasts and facial hair, clothing and mannerisms. None of which are reliable indicators of male-ness or female-ness. Penises and vaginas aren't either, but for me personally, they are a much more essential part of the sexual identity, which (unlike my gender identity) is male. I have one set of genitalia, and want another. My breasts are just along for the ride.

So I will continue to dress as appropriate for my comfort in this hot weather, which means tank tops and T-shirts. No bras or binders and little or no layering. As a consequence I will continue to be misgendered as female by strangers. And that's not OK, but the alternative (dressing uncomfortably and/or having unwanted surgery) is less OK, so this is the unhappy choice I make.
Collapse