Today's top, front page, "In the news" item on Wikipedia: "The Supreme Court of India recognises a legal third gender for hijra and transgender individuals." 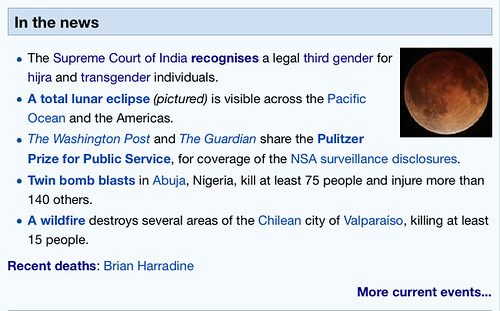 I contributed to the discussion that made this happen, and helped edit some of the linked articles. Proud to be a Wikipedian today.

In more personal news, I have taken active steps toward getting a court-ordered legal name and gender change:

- Cashed in some old traveler's checks and savings bonds, which should cover the filing fees (and avoid problems redeeming them later since they're under my birth name)

I am hoping to get this entire process, including a new state ID and passport (which I'll apply for once I get the court order), finished by August, in time for our trip to Washington for the Beat the Blerch half-marathon in September. If it doesn't look like I'll have my new IDs by that time, which is a strong possibility, I'll have to fly under my birth name to avoid problems with the TSA. I'm registered for the race as Pax and male, but I'm more concerned about the flight.

boyziggy can book our hotel under his name and I assume I won't have to show ID for that.

It will also be really nice to have my correct name and gender* legally recognized by the time of our tenth wedding anniversary on September 25. I'm still hoping to renew our vows near that date, though it will be a semi-private ceremony as we're doing the trip in lieu of having a larger celebration.

* I have put aside my desire to have nonbinary genders recognized in this country for the time being. Right now it's more important to me to be recognized as male, though I consider that to be a sex rather than a gender. I have more important goals to accomplish.
Collapse