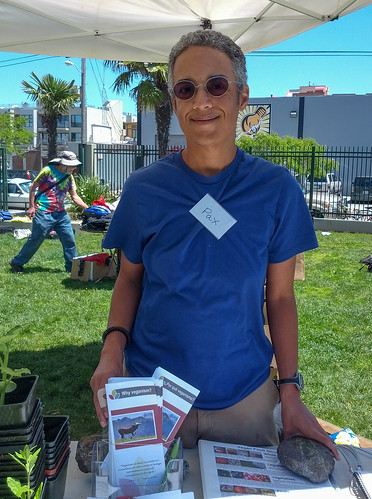 boyziggy's agreement I have decided to devote myself to volunteer work in food distribution rather than going back to paid employment. Accordingly, I've increased my time commitment to the Free Farm Stand and related projects, including working at a community garden in the Mission and at Alemany Farm. Check out the huge vegetables we harvest there: 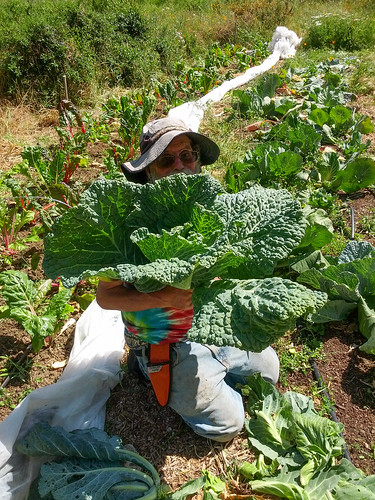 I spoke with Tree (pictured above, hiding behind the cabbage), our leader at the farm stand, about the readings I'd been doing on abolitionist veganism, and gave him a flier from the Abolitionist Approach web site. He said that we should hand out these fliers at the stand, as the purpose of this project is to be a source of education and community sharing, and not just a food give-away. I enthusiastically agreed. For cost and aesthetic reasons I decided to go with the flier from the Abolitionist Vegan Society web site instead. I registered as an advocate (ID: funcrunch) and asked them to send me 75 English and 25 Spanish fliers. (I also sent a small donation to cover the printing costs, but this was entirely optional.)

The fliers arrived Friday, in time for me to take some to the community garden where I now work once or twice a week. I announced to the eight or so volunteers at lunchtime that I had them available and would be happy to answer any questions. 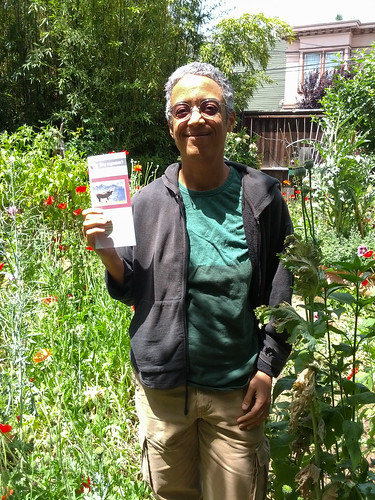 I had two good discussions with people who agreed to take the fliers. One was an ovo-lacto vegetarian. She agreed with my assertion that eating eggs and dairy is not morally distinguishable from eating flesh. She did ask if keeping backyard chickens seemed OK though. I explained that these hens' brothers were normally killed shortly after birth, that hens will often eat their unfertilized eggs for nutrition if they are not taken, and that hens can live many years beyond when they stop laying. She wasn't aware of all of these facts, and was glad to get the information.

Another volunteer I spoke with was omnivorous. She said that especially in our capitalist society, she didn't think a vegan world would be possible. I told her that I, a member of numerous minority groups who was now living freely and well, was living proof that dramatic social change was possible. I noted that in a capitalist society, consumer demand drives production, so if people stopped demanding animal products, animals would stop being bred. I also said that we might never live to see a world without rape or murder, but we would never say that we should just live with these crimes instead of fighting to abolish them.

She mentioned needing eggs for protein; I explained that the beans we'd just had for lunch had more than enough protein to meet our needs. She talked about the need to combine protein foods to get enough amino acids; I said that myth had been debunked decades ago. She said she knew of people in Mexico who couldn't get enough nutrition from the beans they ate; I said it was possible they weren't getting enough calories, period, and possibly also not enough fresh vegetables and fruits. Basically for every point she brought up I had a good response ready, and I felt it was a very productive and congenial conversation. She took a Spanish-language flier, as did another volunteer who was listening in on the conversation. She also invited me to come visit an LGBTQ anti-violence organization she works with, saying that they might be interested in the fliers there as well.

Today was my regular Free Farm Stand shift. I brought about two dozen English and ten Spanish TAVS fliers, along with a binder full of vegan recipes I'd collected which were freely available on the web, including some favorites from Happy Herbivore and The Engine 2 Diet. (I'd printed out small slips of paper with short URLs and QR codes linking to the web sites, rather than copying the full recipes themselves.) I set up at our "Hecka Local Produce" table, where we gave away produce I'd helped harvest from Alemany Farm and the community garden, as well as donations from local neighbors and other nearby sources. While helping hand out and restock produce, I offered recipes and information on veganism.

I had several good conversations. Two were with ex-vegans. I'm always curious why someone chooses to return to eating animal products after giving them up, so I politely inquired their reasons. One said that he was living in India as a vegan, eating a lot of beans, and began to feel ill, then ate some eggs and felt much better. This happened a second time as well, so he decided it must have been calcium deficiency. This didn't make sense to me, as calcium needs are vastly overstated, and eggs wouldn't be a good source in any case unless he was also eating the shells. Rather than saying this to him though, I simply pointed out that he was now surrounded by abundant dark leafy greens, an excellent source of calcium. He then said he couldn't be vegan now because he was diabetic. I told him that Dr. John McDougall had gotten many Type II diabetics off medication with a starch-based vegan diet. I wrote down the McDougall web site URL on the TAVS flier, which he agreed to take.

Another ex-vegan said that her daughter was vegan and she used to be, but she had lost a lot of weight, and went to a douser (faith healer, essentially) who convinced her she needed to eat meat. Without commenting much on the douser, I said it was possible she just wasn't eating enough calories. She agreed that might have been the case. I also told her about all the male chickens killed shortly after birth for the production of eggs; she agreed that this was horrible, and took a flier and promised to read up on it.

The killing of the male chicks seemed to surprise and disturb several people I talked with. A lot of people really don't realize that eating dairy and eggs involves just as much death as meat. I'm glad to be able to give that information in a matter-of-fact way. Though one other ex-vegan said he "already knew all about this stuff" and was unwilling to engage further, most who agreed to talk with me seemed thoughtful and genuinely interested in hearing what I had to say.

After we closed down and packed up, I talked with Tree about my conversations and experiences. He was very happy, saying that this was the whole point of what he was trying to do with the Free Farm Stand project. Though none of our other regular volunteers are vegan (Tree himself eats honey and keeps beehives, but otherwise avoids eating animal products), he really wants people to be more aware of what they're eating. I'm glad to have taken the initiative and found the courage to talk more with friends and strangers about this subject.
Collapse