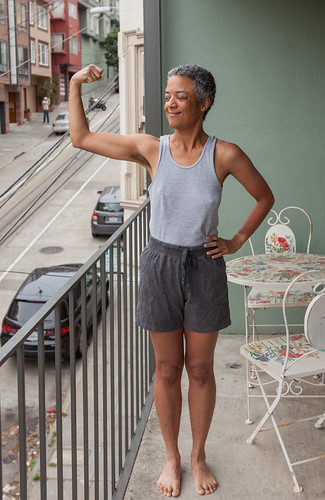 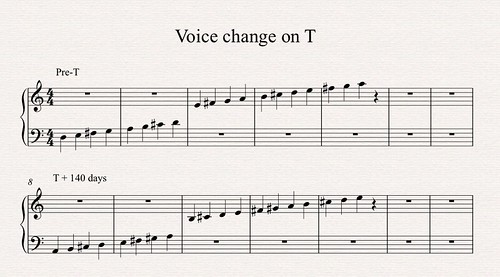 I'm coming up on six months on testosterone. The changes to my appearance are still pretty subtle to my eyes. The biggest changes are to my voice and my genitals (the latter not pictured, sorry!) Most significantly, at five months I had not yet stopped menstruating, so my doctor agreed to raise my biweekly dosage by 50% (as I was on a pretty low dose to begin with).

I have not suffered much yet from the side effects that I was warned would probably happen: acne and weight gain. I believe both have been kept at bay by my lowfat vegan diet. Less fat, especially from extracted oils, in my body means less fat in my skin. Though when I increase my T dose next week, I expect I might have more acne and other side effects to deal with.

My weight has remained stable, within three pounds of 120 lbs (BMI 20-21) and waist size 26.5-27 inches since New Year's. I have not been getting as much formal exercise as I should, though now that

boyziggy is getting a lot more physically active we've been running together more. My increased work schedule means I have been getting more physical movement in; one day last week I spent nearly three hours shoveling compost and carting wood chips from one part of the garden to another. It's great to work outside this time of year, but I'm sure it will be a lot less fun when it's really hot or rainy out.

It's both funny and sad that at 118 pounds this week, I feel remarkably scrawny for a "man", whereas when I was a "woman" and weighed 115 pounds that seemed just fine. The number on the scale is, of course, arbitrary and not a good measure of health independent of other factors. But there's a not-subtle double standard in what is a desirable size for each sex, and not just in Hollywood or society as a whole. I've seen it in the local poly and queer communities too, except with heavier women instead of skinnier women being the desirable standard, while not as much is said about men's bodies. Before transition, I certainly had a lot more dates and sex at 160 pounds than at 115 pounds. I get it; on female bodies, larger breasts and more pronounced curves are seen as more attractive by many. Whereas for male bodies, it's more about muscles, especially in the gay community.

I take a biceps curl photo each month as part of my transition photo series, but it's kind of a joke since I don't have much upper body strength yet. I feel really good when I can lift heavy boxes and shovel, saw, and chop things as part of my work, but I do push-ups at home in private where no one can see that I still can't do them with the proper form. I won't do them with my knees on the floor anymore, but with my legs straight, I still need to do them at an angle. Right now I'm using the couch. I haven't been doing weights lately because I feel body-weight exercises like push-ups and planks are more effective overall. But I'm certainly no expert.

Running, at least, I feel good about, especially now that I'm not focusing on racing. Every time I feel tempted to skip a run, I remind myself that I have never regretted going out for a run, but I have often regretted not running. So I'm really grateful that

boyziggy and I can now push each other to get out there and enjoy the fresh air and sights in this beautiful city.
Collapse