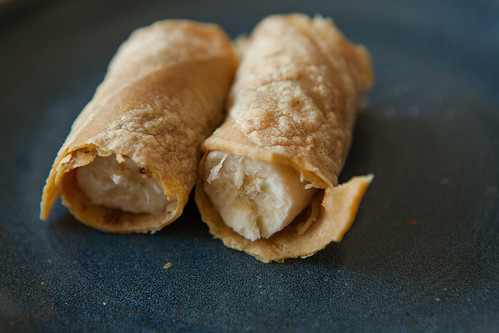 I mentioned in my previous entry that I've been attempting to use corn tortillas as an SOS-free bread substitute. Here's one example. A snack I've been enjoying very frequently in recent years is an open-faced peanut butter and banana sandwich. Normally I'd simply spread peanut butter on a slice of whole wheat bread, top with banana slices, sprinkle with cinnamon, and add a small squirt of agave.

When I started going SOS-free, at first I left out the agave and switched to salt-free peanut butter. But the few SOS-free breads I found were not at all tasty. I thought I'd have to give up my favorite snack. Then I decided to try warming a corn tortilla (or actually two halves of one, as my whole bag of tortillas managed to split in the middle) and roll up the bananas, peanut butter, and cinnamon that way.

It was... not bad. I actually imagined someone who was not SOS-free could try inserting a popsicle stick and deep-frying these. Or maybe they would need to roll the bananas in corn masa batter first. Sort of vegan banana corn dogs? Not to give anyone ideas....
Collapse