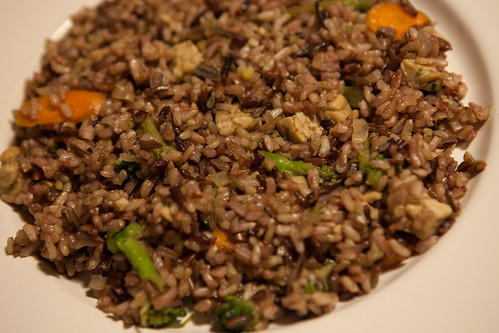 "Fried" rice, made with vegetables sauteed in vegetable broth rather than oil, is a staple meal at my home. I always make large amounts of brown rice at a time so that I have leftovers available for this and other dishes. I got the original recipe from The McDougall Quick and Easy Cookbook

, which calls for either instant or leftover brown rice, plus soy sauce, fresh ginger, garlic, and vegetables. I usually include broccoli and add either cashews or diced extra-firm tofu. In the dish pictured above, I used homemade tempeh gifted to me from a friend, and the same brown and wild rice blend I used in the Jeffburgers I posted previously.

For years, I've used reduced-sodium tamari instead of soy sauce. This condiment is not low in sodium, however, containing 700 mg per serving. I decided this had no place in an SOS-free diet, so tried Bragg's liquid aminos, which are salt-free, as a replacement. I was concerned that Bragg's wasn't organic, meaning that the soybeans might be GMO, but figured I'd use up what I had until I figured out a better replacement.

Upon further reading of the label however, I realized that these aminos, despite being salt-free, are even higher in sodium than the tamari I was using. The amount of sodium listed is 160 mg per serving, but a serving size is only 1/2 teaspoon. The 700 mg per serving of reduced-sodium tamari is for one tablespoon. Very sneaky! It would be quite easy to be fooled into thinking this is a low-sodium alternative when it is clearly not.

This called to mind a great video featuring Jeff Novick, which exposes the lie of "fat-free" oil sprays, which are 100% fat and have a serving size of "1/3 second spray". While searching for that video, I happened to come across another one by him that says exactly what I just wrote about soy sauce above.